Dread and Preselection: What You Need To Know.

An interesting post over at HUS clues in the ladies to the use of Dread in Game, giving a female perspective and warning against men you overuse this technique early in a relationship.

Deti, as usual, had some incredibly insightful things to say, but I had to put in my own two denarii worth.

Here's what I wrote, with a few small additions: 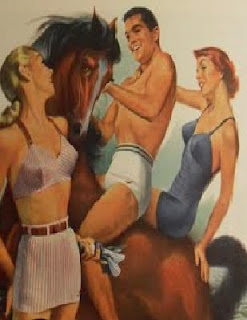 Dread is a legitimate tool in a married man's Game toolbox, but its use is recommended ONLY for certain specific instances (where divorce is already looming in the minds of one or the other, for instance).

Gentlemen, there is a difference between using Dread (consider it the Abrams Tank of tools) to destabilize a long-term relationship that has settled into an impasse that cannot be broken otherwise, and using Preselection as a legitimate, delicately applied tool of buffing your SR relative to your SO.  Women who read this might not understand the subtle distinction, and see ALL flirtations as real attempts to cheat, or at least disrespectful of the integrity of the relationship.

But that ain't necessarily so.   Using gentle Preselection can be invaluable in maintaining a higher SR, but there's an art to it.  Openly flirting with women in front of your wife is NOT the way to do it.  Casually mentioning that some woman asked for your phone number at the grocery store is more reasonable.  Collecting other women's phone numbers or email addresses might do wonders for your Confidence, but it's going to slag your relationship by reducing her security in it dramatically.

You have to understand the psychological element and the subtleties of using Preselection in Married Game.  Your wife doesn't have to feel directly threatened in order for the Preselection buff to be effective.

For example, spending a "daddy/daughter" date that deliberately excludes your wife (as I recently did, here) is a wonderfully wholesome way to both make your wife jealous to initiate the Preselection buff, and encourage that blind adoration of Daddy that will take years of therapy for your little girl to get through.


Or, if you REALLY want to be a real bastard and have a lot of the benefits of Dread and Preselection without the danger of sexually humiliating your wife, take her sister -- or, better yet -- her MOTHER out some time.  Just the two of you, lunch, coffee, shopping, dinner, whatever, on any old excuse, and be utterly charming to them.  Flirt, laugh, sell them on the idea that you're the perfect dude by gaming them gently, so that in the post-"date" discussion that inevitably happens your wife is confronted with women you know intimately who think you are a catch, and what's her problem?  That incites the basic competitiveness (oftentimes even more than with a non-related female) without endangering the integrity of the relationship.

Are Preselection and Dread inherently manipulative?  Perhaps.  So is a low-cut blouse and a push-up demi-bra.  So is a hair-toss.  So is a shit-test.

Women utilize the tools of their sexuality in a hundred different subconscious ways to gain advantage every day, and apart from a token protest by hardcore feminists, they accept it as a "feminine prerogative", not "manipulation".  But instead of considering this similarly a "masculine prerogative", consider it instead an "effective tool of marriage management", understanding that if your wife thinks that no one else will want you, she'll stop wanting you, too.

Dread is a harsh tactic.  Dread can be cruel.  Like chemical weapons, Dread should only be employed when all other avenues fail.

First, she knows that our relationship is solid enough to preclude any serious involvement without powerful warning signs far in advance, and that my constantly-affirmed commitment to my wife and children is not going to be swayed by a hair toss, big tits, or even aggressive, suggestive flirtation.

Secondly, Mrs. Ironwood will not hesitate to cut a bitch.