I frequently get requests from folks who want to know what else I have written.  While I've got several pseudonyms, these are the works that appear under the Ian Ironwood name:

Of course, the most recent, and probably the biggest:

The Manosphere: A New Hope For Masculinity 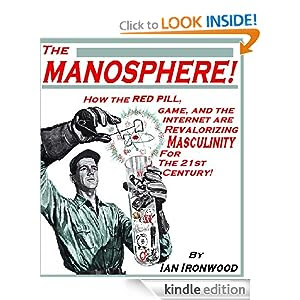 The Manosphere is a loose collection of blogs, books, and forums about men, male issues, and masculine interests. Covering areas of this vast "dirty snowball" like Pick Up Artists (PUAs) and Game, Traditional and Christian Conservatives, Wise Old Men, Puerarchs, Alpha Dads, Men's Rights Activists, (MRAs), Men Going Their Own Way (MGTOW) and other facets of masculinity in a post-feminist world, Ironwood has designed this book to be a survey and introduction, not an exhaustive study. Find out why men aren't getting married as much or as early. Find out what your daughter's chances of finding a "good man" really are . . . and figure out what constitutes a "good man".

Aimed squarely at feminism's tropes and misandry, The Manosphere delves deeply into gender relations from the masculine side, and where it takes you may surprise you. Men today are struggling, searching, healing, and fighting . . . but they are more and more coming to the feminism-inspired conclusion that the time has come for them to pursue their interests as men, often independent of women or their interests.

Whether you're pleased or outraged, this is the first look at a rapidly-developing and soon-to-be widely influential area of the internet blogosphere. Why is 50 Shades of Grey so popular, and what can married men do about it? Why is it so hard to find a good man? Why is it so hard to find a worthy woman? Why is 300 the greatest masculine film ever made, just ahead of Fight Club and Porky's? And what does the future hold as more men leave the workforce, pursue fatherhood with passion, and look with skepticism on a culture that punishes and denigrates them on the basis of their gender.

The Men of the Manosphere aren't Right Wing thugs or mindless trolls -- they are seeking thoughtful answers to difficult problems. In the process, they are revalorizing masculinity itself, adapting it to a post-modern, post-industrial, post-feminist world. It's not a world of equality, it's a world of equilibrium. It's not a world where men become better at serving women, but where men become better men. And it is not a world of sensitive new age guys talking about their feelings . . . it's a world where sweat, respect, honor and fidelity are the coins of the realm. As more and more men, married, divorced and single, "take the Red Pill" and apply the knowledge of the Manosphere to their relationships, a wonderful thing is happening: men are growing strong, more secure in their masculinity . . . and less likely to capitulate to feminine whims on the basis of the feminine imperative. 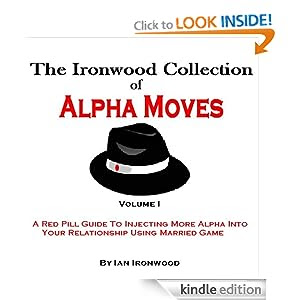 Has someone hinted that perhaps you could stand to show a little more backbone in your relationship? Does your wife slip away to read mommy porn, substituting 50 Shades of Grey for the sexual attention and excitement that you used to provide her? Do you feel like you just need to step up, man-up, sack-up, and start living life a little more boldly, even if you're married?
When someone tells you to just "be more Alpha", how do you do that, exactly?
This is a good place to start. Using the disciplines of Married Game, noted Manosphere blogger, sex writer and porn reviewer Ian Ironwood takes you on a Red Pill adventure that is both practical and romantic. You'll learn how to exercise your latent masculinity and assertiveness within your relationship. You'll learn how to build - or rebuild - attraction with your wife . . . without kissing her ass! If you've considered improving your sexual relationship by Gaming your wife, then this collection of Alpha Moves - assertive displays of masculine value designed to promote sexual attraction - is an ideal place to start.
Culled from hundreds of blog posts, Ironwood gives helpful advice on cultivating the Alpha side of your masculinity without severely altering your lifestyle. Ironwood's moves range from the remedial level to the advanced, and he talks you through each element so that you understand why it works. Ironwood uses his own relationship as an example, and the frank-speaking Mrs. Ironwood is always ready to provide her perspective.
As an additional bonus, this collection comes with three previously-unpublished Alpha Moves!
For a price of a pack of cigarettes, this book could help you restore your sense of masculinity, provide you with guidance in projecting that effectively toward your wife, and teach you how to understand the nature of her responsive sexuality! With wit, humor, and utter candor, the Sex Nerd shows you what Alpha looks like, regardless of the man.
$4.95 Kindle Edition (Free Loan to Amazon Prime members) 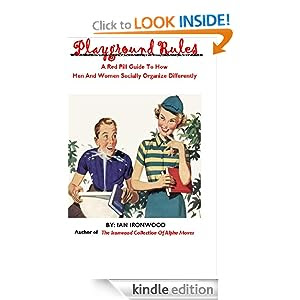 Why is it when men self-organize, it resembles a sandbox, but women resemble a swingset? Why is the water fountain so important? What is female solipsism and what effect does it have at work and at home? What is the Female Social Matrix, and why is it so darn important? What are the circles in your wife's Matrix, and how can you improve her position? And just what does love have to do with all of this?
Manosphere blogger Ian Ironwood, of the Red Pill Room, pens a Red Pill guide to understanding the psychological intricacies of group social dynamics without recourse to ideology. Filled with intriguing observations and thoughtful discussion on the subject, if you have ever professed mystery at "why men do that?" or "why women do that?", this book may have the answer you're looking for!


The Gentlemen's Guide To Picking Up Women KINDLE EDITION 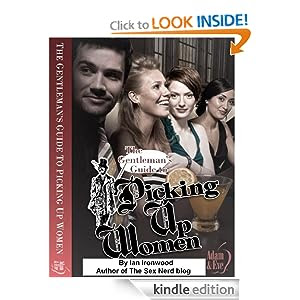 Can't find a girl? Can't talk to a girl? Tired of whacking off but have no idea how to get a girlfriend in this day and age? This remedial guide is designed to help even the most hopeless male find the courage and confidence to approach women in his daily life with the ultimate goal of finding one he likes permanently.
Consider this an Introduction to Game, for those who were too busy with videogames and divorce hearings to figure out these valuable, basic rules.

CHEAP AS HELL at $.99!  A kind of proto-Game book for the near hopeless or clueless.

My experiment in serial fiction.  It's sexually explicit steampunk, set in an alternate 1890 world in which airships are all the rage.

"The Sky Panthers Argosy is a work of serialized fiction. Your buck has bought you roughly 20,000 words of original fiction. There will be another installment that will also cost you a buck, and which will advance the story and arouse you sexually and challenge your sense of history.
It has clockwork prosthesis. It has sky battles between airships during the Age of Empires in an alternate history. It has Victorian gentlemen burglars, opium-addicted mercenaries, randy Native American princesses, clockwork vibrators, magic stones, feuding empires, tribal vendettas, national enmities, and a host of historical and fictional characters including – but not limited to – Geronimo, Billy the Kid, Max Planck, Napoleon IV, Flashman, Aaron Burr’s grandson, a couple of jazz musicians you’ve probably never heard of, some Cherokee marines, some French, Chinese, and English whores, a cockney criminal, the Parisian demimonde, the Moulin Rouge, a very unfortunate orangutan and much, much more.
And above all, it has sex in it. Mostly it’s not gratuitous, although I would argue that we all have a certain amount of gratuitous sex as a matter of course, if we’re doing it right. That might put some people off, it might lure others, but the simple fact is that this work is not only an homage to the great 19th century adventure stories I came to love, it is also an homage to the wealth of Victorian-era erotica we’ve inherited.
If you don’t know what Steampunk is (and I think that unlikely, considering you bought this book) Steampunk is a subgenre of science fiction that relies on the trappings of the Victorian Age for background and style, using clockworks, steam power, and other 19th century technology in place of our nifty and infallible computers. "Wild, Wild West", the original 1960s tv show, was an early example, as was the hideously bad recent movie of the same name. Other examples in popular culture include "The League of Extraordinary Gentlemen", "The Golden Compass", "Starlight", and the Disney flick "Atlantis". Among SF literature, arguably the first modern steampunk novel would be William Gibson's "The Difference Engine", although there are elements of the fanciful genre in his later "Diamond Age: A Young Lady's Primer".
Think airships, HG Wells, Jules Verne, lots of polished brass, leather, corsets, clockworks, trains, that sort of thing, and you've got the idea. Technology rendered in beautiful artistic fashion, not the dull, sleek, utilitarian feel we have in our designs today. "


The Sky Princess Of Oklahoma (The Sky Panthers Argosy)