But he was not just a cheesecake artist; Nappi provided the illustrations for some of the most iconic works of the 20th century, namely the Hardy Boys and Nancy Drew novels, among an impressive amount of other commercial work.

From a marketer's perspective the kind of work Nappi did is an increasingly lost art; once illustration ruled the advertising marketplace, and Chicago, New York, and other metropolitan areas bristled with commercial artists doing their work the old fashioned way, with pencil, ink, and paper.

When commercial photography became sophisticated enough to be used in marketing the periodicals of the mid 20th century began to move away from illustration and toward illustrative photos; while that, too, is an art, the work that Nappi and his colleagues cut their teeth on dried up over time.  Only on novel covers and the occasional bit of nostalgia did you see a hint of this again.

What is ironic is that the "sleazy" work that these artists did, and Nappi in particular, was brilliant illustration that conveys some very primal and powerful emotion.  In the way that master artists do, Nappi's technique became refined over time, and according to the dictates of the market.  But for me his best work continues to be the mid-century pulp illustrations he did so masterfully.

I find this particularly sad because I had hoped to find a way to interview the man this Spring, as we lived in the same state.  When you discover a monumental talent like Nappi's is in your backyard, it's painful to know you missed a chance to meet the man who inspired so much for so many over the years.

These are the emails I kindly received from his family:

Hello-Rudy was my great uncle.  We got news this weekend that he passed away on Friday.  He was pre-deceased by his wife by three days.  March 10th for Peggy (Margarete) and Friday for my uncle.My Dad, George Nappi, found your website and said the following about one of your covers.  Rudy often used family members for his illustrations.  Dad said the following about the cover for Yesterday’s Love: 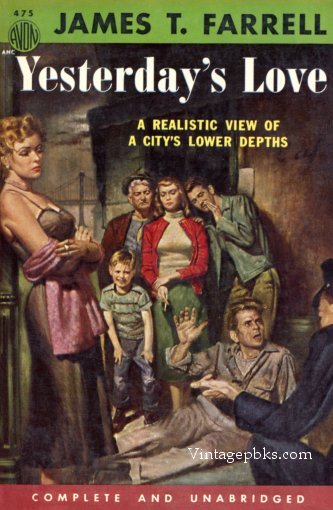 The man on the ground is my Great Uncle Charlie Zappalla,my grandmother's brother in law.  The little boyis my cousin Tommy Vreeland.  Aunt Justine's son.Man standing with the hat is Aunt Peggy's FatherCharles Shubert. The other standing man isUncle Rudy's best friend & best man EUEverett Upwall.  The women are changedfaces but posed by Aunt Peggy. Tommy was used as inspiration for the Hardy Boys and Rudy’s daughters were used as inspiration for Nancy Drew.He was a great man – well loved by everyone who met him and will be much missed!
-Karla (Nappi) Gadecki

I am Rudy Nappi's nephew. I am sad to report that on March 13th 2015 he passed away, 3 days after his wife my aunt Peggy (Margarete). They passed away in Charlotte, NC where they lived. They are survived by his two daughters Lynn & Susan & their family's. In reporting his death I forgot to mention one thing. His name was Joseph Rudolph Nappi; but, he preffered to use his middle name Rudy. He was also known for his nature & wildlife paintings. He & my Aunt Peggy, his wife, went on safaris for the research on wild life paintings. I cannot recall the organizations he did the paintings for.

Our collective thanks to him and his incredible talent for so many rich decades of entertainment. I would love for someone in the family to contact me, so that I could do a complete article in memorium.  Please let me know if there is anything we can do for the family. Our condolences to losing such a great man.
Posted by Ian Ironwood at 4:09 PM 33 comments: