A fun little expedition into Emily Nagoski's blog last week led to another blogger, 30soemthingandbreakingup, to post a short little cry of dismay at the idea of "changing himself" in order to get more sex.  He clearly misunderstands the Alpha-Beta dynamic, so I thought I'd set him straight.  His post went like this:

“He (Ian Ironwood) seems to be implying that in order to gain success, we all need to became an “alpha male”.
Hang on a moment, if I attempt to change to become something (the bad boy) in order to get more sex, am I not then pandering to women’s demands and falling straight into the trap that he seems to be insisting we must climb out of?”

Not exactly. Let me break it down for you, my brother:
Alpha and Beta are not in-born absolutes.  They are two sliding controls, like bass and treble, not one knob. The two sides focus on different aspects of masculinity, the ability to attract and inspire a sexual response (Alpha) and the ability to comfort and protect a mate (Beta). Both sides are equally important to the mating process, but you have to know which one is appropriate, and you (even more importantly) have to be self-aware enough to understand just how you, personally, measure up in both realms and adjust accordingly. 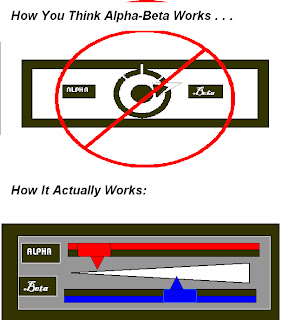 In our youth, we rely on our Alpha skills first and foremost to do the stupid thing that attracts some girl’s attention. Then we get into a relationship, have sex, and start settling into a Beta mode (unless we’re unhappy with our selection, in which case we stay Alpha and keep looking for fresh poon). The problem is feminism has encouraged us to downplay the Alpha totally, and accentuate the Beta until it becomes mindless deference to anything with a vagina. Sounds like a feminist dream, no?
Well, no. Instead a woman in a relationship with a Beta starts craving Alpha, and if she doesn’t start getting some she starts agitating for it with shit-tests and demands and disrespectful behavior, ultimately culminating in “I love you but I’m not in love with you” while she’s starting a relationship with a dude with a hot car and a nine-inch tool.
That is, your subjective sex rank has fallen (she doesn’t think you’re hot any more) and she’s no longer interested. If you’re a Blue Pill dude, you keep giving her Beta in a desperate attempt to appease her, and she either doles out the sex just enough to keep you in the relationship as her willing slave or she stops all together and starts shopping for a more Alpha solution.
So no, not everyone needs to become an “alpha male”, any more than every woman needs to become some pornstar model “alpha female” in order to get laid. But without a well-developed sense of your own Alpha characteristics, and the understanding of Game that allows you to buff either Alpha or Beta at need, you’re going to repeat the Blue Pill cycle until the divorce attorneys start to pile up. If that’s your thing, enjoy.
If not . . . consider the Red Pill.
The Red Pill isn’t a path to becoming a Bull Alpha, it’s the path to balancing — and invoking — the Alpha or Beta at need, in response to her shit tests and genuine requests for assistance. Since most dudes in a relationship suffer from low Alpha and high Beta, the Red Pill usually — but not always — means learning how to demonstrate more Alpha. “Demonstrate” being the key word.
You see, it’s not about necessarily being an Alpha, it’s about triggering a subconscious Alpha response in her. You do this by making DHVs (Displays of High Value — the stuff that proves to her Body Agenda that you’re worth fucking) and taking a subtextually dominant position in your interactions. You aren’t bullshitting her at all. You are revealing your Alpha side to her.
Now, you might consider that bullshitting if you’re a true blue Beta and just can’t manage to do anything but care, share, and go antiquing every Sunday. But if you do occasionally like some poon — and most of us do — then you have the capacity within you, someplace, to access your dormant Alpha characteristics enough to incite her loins. How is that bullshitting?
You aren’t “pandering to her demands” at all. She’s a biological machine, just as you are. If she asks you for a favor while taking off her bra in front of you, regardless of what the hell she’s saying or how pissed you might be, your brain is saying “hey, free boob!” and altering your responsive thinking by pumping you full of lusty hormones. In much the same way, you putting a dominant hand on her shoulder, kissing her aggressively, and standing up to her bullshit invokes an in-born biological response in her that she has no conscious control over. It’s biology, not bullshit. Feminism is the bullshit. And I mean that in the nicest possible way.
So quit your moaning and whining about how you’ll reserve your virtue for only women who can “accept you as you are”, because the cold fact of the matter is that if you were that great of a prize as you present yourself to be, you’d be accepted as you are already.
And change?  You aren’t the person you were five years ago, and five years from now you’ll be different yet — yet you complain about the need to “change”. You’re gonna change anyway, Bub. The Red Pill just gives you some guidance about how to change in such a way as to have a fulfilling sexual relationship at some point in the future. Remember, growth is change.  You can embrace both sides of your masculinity, find the RIGHT woman, one who is a worthy match for you, and you can spend the rest of your life making her happy while she righteously fucks you, OR you can keep taking the Blue Pill, obsess about “being yourself” and “treating her as an equal” and have a string of lackluster relationships that only grow more complicated and frustrating as you repeat the same mistakes over and over again. That way leads to a long, lonely life of masturbation.
Since I work in porn, I’m cool with that. Stroke away.
But in your own best interests, you might want to consider giving the Red Pill a more thorough examination. I’d recommend you start with Athol Kay’s remarkable The Married Man Sex Life Primer 2011. It costs about the same as buying three drinks for three girls who aren’t going to be impressed enough to give you their digits, or the price of a nice dinner for a “nice girl” who isn’t going to give you any play because you respect her too much.
And for Goddess’ sake don’t whine about the “near impossible demands of the modern woman”. It’s unmanly. That’s the WHOLE FRACKING POINT: taking the Red Pill means ignoring her demands (what she says she wants) and instead giving her what you know she needs. And once they get what they need (at least three or four times a week) then it’s amazing how their “demands” become highly optional politely-worded requests.
You’ll get there. Don’t give up.
Posted by Ian Ironwood at 12:42 PM