Continued from Phase I Preselection 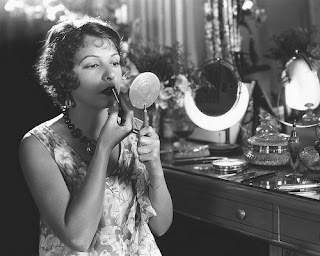 Within moments of sending the text, I got a call.

"What do you mean, put on makeup?  Niece just showed up and told me to jump in the shower!  Where are we going?"  Stress, a trace of exhaustion, irritation . . . she's a little put-off by the sudden developments, and she doesn't hesitate to tell me.  "You know I don't like surprises!" she lies.  I can tell by her voice that behind the anxiety there's excitement.

"We'll discuss it when I get home," I said, simply.

"Well, what should I wear?" she nearly demands.  As per usual, when faced with a potential crisis a woman's first refuge is her wardrobe.

"Those shoes you've been wearing to work will do.  They're comfortable enough, aren't they?"

"The night is young," I say, mysteriously.  "No telling where we might end up."  That pisses her off just right. In point of fact, I know precisely where we'll end up.

"Well, what about my clothes?  What should I wear?" she repeats.

"I don't care.  I wouldn't recommend absolute nudity, but beyond that I'm pretty open."

"I trust your judgement."  She hates it when I say that.

"Ian, I need some direction!" she nearly pleads.  I chuckle.  Further confirmation of the efficacy of the Red Pill is not needed.  She just summed up our relationship dynamic in a nutshell.  Of course, she couldn't let me exercise that kind of power without trying to rein me in.  "You know, you're being kinda a dick about this."

"We're going on a date," I finally admit.  "That's all you get for now.  I'll see you in about half an hour.  We'll leave fifteen minutes after that."

"What about the kids?" she asks, forgetting that the Niece is there.

"We won't be bringing them.  They've had their fun for the day.  Their pizza will show up at 7:30.  I've already laid out their meds.  Niece has been fully empowered to administer beatings on an as-needed basis," I promised.  "Get your ass ready.  Love you."

"I think I love you too!" she says, annoyed, and hangs up.

"What did she say?" Daughter demands, impishly.  "Was she surprised?"

"Yes, she was surprised.  And she said pretty much exactly what I expected her to."

"She's gonna love it!" she beams, with a trace of jealousy.  It's mitigated by the fact that I've confided in her, and not her two brothers, about the Big Date.  They couldn't keep a secret from their mother if their lives depended on it.  She, on the other hand, had no compunctions about being sneaky about the other woman in my life.  Estrogen's not so bad, if you can play it off against itself.

We finish running a few preparatory errands before we get home.  Mrs. Ironwood has, at this point, changed four times, the Niece reveals to me in a private moment.  I find her in the bathroom working on outfit #4 -- something casual, jeans and a sweater.  She looks nice, MILFalicious, even, and she's "beaten her face" into submission as well.  It's not Wedding Makeup, but it's Dinner With The Vice President Makeup.  Perfect.

"Are we going to be having our picture taken?" she demands, nostrils flaring.

"That is one possibility," I concede.  I suddenly realize that I could have had us actually sit for a portrait at some point in the evening, a special Husband/Wife photo.  I file it away for future reference.  That's a High Beta move, but planning and executing it yourself would be a High Alpha move.  In most cases, it is the wife that arranges and organizes documentary portraits.  Knocking that responsibility off of her plate would be a huge SR buff.

"All right, I've had enough of this mysterious shit!" she says, whirling on her heel to face me, hairbrush held only inches under my nose and quivering dangerously.  Her nostrils are at about Level 3, now.  But she's biting her lip.  Upset and excited.  Just where I want her.  "I've dealt with Girl Scouts all morning and Cub Scouts all afternoon on my Saturday, and I'm exhausted!  I wanted to come home, crawl into bed, and pass out -- I was out in Nature today, building bird houses!" she complains.  She's not a fan of Nature, being highly allergic to it.  She takes drugs for it which allow her to function, but she and Nature have feuded all her life, and she actively resented being confronted with it.  "Where the hell are we going?" she demands. Borderline emotional explosion.  Proto Shit Test.  How I handle this will determine the outcome of our evening.

I don't shift my gaze.  I count to five in my head to let the silence fill the air.  Too many men rush into a response to a challenge like that, assuming that if they don't speak quickly, then their wife will thing she's caught him flatfooted.  This is different.  This is me preparing to Order the evening.

The power to Order -- that is, to set initial conditions and ultimate expectations, as well as proscribe the method and manner in which an action or event takes place -- is one of the fundamental Masculine powers.  I do not mean "order" in the sense of "to order (someone to do something)".  I mean it in the sense of "establishing order".  It's not an accident that the Captain of a ship's directives are called "orders" -- they "order" the ship.

One of the things about taking the Red Pill is that you have to accept -- nay, embrace -- that power, and when you recognize an opportunity to exercise it, you must do so decisively.  Which is why I waited.  I wanted just enough silence to let her know that what I was about to say was Important, and this little pause was a bit of showmanship to add credence and authority to my Order.

"Babe, you can go crawl into bed right now and I'll make sure you aren't disturbed until morning.  Or you can get your ass in the car in the next ten minutes and go with me.  But make up your mind and embrace your choice, because either way I don't want to hear any complaining about the evening, regardless of which one you decide upon.  Your choice."  That was it.

She closed her mouth.  She bit her lip.  She let out a big sigh, and seemed to resign herself.  "I'll be ready," she promised, tossing her hair unconsciously.  I gave her a kiss on the cheek and a pat on the ass before I went to get ready myself.

Mission accomplished.  She had been presented with two -- and only two -- clear alternative endings for the evening.  One she was certain of.  One she was utterly uncertain of.  There were no details to discuss, no alternate suggestions, no other considerations . . . because she didn't have enough information, on purpose, to make them.

She had to either go to bed (alone) or she had to trust me and my ability to Order and Lead.  One thing or the other.  And once she was presented with those two, due to my manifestation of Order, she was able to select her choice and be content with it, for the moment.  Yes, there was still Mystery implicit in the evening (she didn't know where the hell she was going) but there was also Confidence in my ability to steer us, predicated entirely on the firm, decisive way in which I Ordered her evening.  So . . .

"I still don't like surprises," she muttered as she finished her hair.

"Yes you do," I countered, cheerfully, and went to Order the kids around in preparation for the evening.

Then I got ready: modest amount of cologne, brush through my hair, toss the fedora, keep the scarf, nothing impressive.  I had "impressive" in a gym bag in the back of my car.  For all she knew, we were going to the mall for a Married People Budget Date Night.  We do that probably more than most couples with kids, but it had been a while.  She seemed to accept that's where we were going, relaxed into the idea of cheap pizza and beer on a Saturday night, and accepted it.  In fact, she looked a little smug as she kissed the kids good-bye and unnecessarily instructed Niece about bedtime procedure.

I interrupted.  "It's been handled," I assure her.  "Get in the car.  We're going to be late."  Calm, sure tones, kept low on purpose.  Inspires confidence.  Inspires obedience.

"Late for what?" she asks, confused.  How could we be late for beer-and-pizza? she's thinking.

"If we don't hurry, you'll never find out," I say, simply, and head for the car.  She follows.  She's back to "confused and irritated" again, but she accepted my leadership.  I'm not about to let her question it now.

We get into the car, buckle up, and the first question comes, as casually as a slow ball over the plate.  "So . . . are we going out to eat?"

"There is food in your future," I promised.

"About dinner time," I answer, unhelpfully.

"Not at the moment."

Silence.  I can almost hear the wheels turning.  Of course, they're so focused on the evening's itinerary that she isn't paying attention to other details.  I'm kind of counting on that.  I head towards the mall.

"For a little while," I concede.  Of course, she thinks we're going to wander around, look at kids' clothes, sneer good-naturedly at the teenagers trying to look cool, before hitting Ruby Tuesday's on the way out.

"Then what are we doing?" she asks, irritated.  We're close enough, now.  Might as well tell her.

"Shopping?" she asks.  She knows I hate shopping.  "Are you out of your fucking mind?  It's Saturday night and you're taking me shopping?"

"Do we really have that in the budget?" she asks, hesitantly.  I handle the bills.  She knows that, and she knows that with three kids and a drive-by niece we have a lot of expenses.  She also knows that I won't spend on frivolities when there are expenses to pay.  And she doesn't know about my little freelance windfall.

"It's handled," I say, simply and confidently.  "We're going shopping.  For you."

"I'm so glad you approve," I say with just a hint of snark as we pull into the parking lot.  She's looking smug.  Like she's got it all figured out: Mall, clothes, Ruby's, home by nine.  It was seven-thirty now. What could possibly happen at the Mall?

NEXT: Phase 3 Power Shopping
Posted by Ian Ironwood at 11:34 AM