Alpha Move: Iron Chef "The Kitchen is MY Domain"

I originally posted this as a comment on the venerable Badger's site, but I thought it bore re-posting here:

A commenter basically said that cooking was women's work.  I passionately disagree.  Here's why. 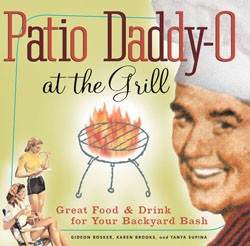 While cooking has traditionally been done by women in agricultural and tribal cultures due to the division of labor, there is nothing unmasculine or inherently and irredeemably beta about cooking.  Indeed, it can be an intensely profound exercise of male power.

Mrs. Ironwood can't cook.  At all.  Her brother and her male cousin were both adept professional chefs.  She and her mother . . . well, they couldn't cook their way out of a refugee camp with Paula Deen helping them.  My wife once washed pasta with soap.  Two weeks after moving in with her, I excused her from all future attempts and assumed the duties exclusively.  Indeed, I wrote into our marriage vows that I will "Feed her when she is hungry".  She's utterly abysmal, due in part to her training in science, which requires exact measurements and such. ("It's says 'brown the beef' . . . how brown?  What shade of brown?  AGHH!" -- actual quote).

I, on the other hand, have cooking as a part of my family culture, with a legacy cookbook and everything.  I've cooked professionally for years, and pursued it as a passionate hobby since my teens.  The skill certainly got me laid in college -- there is great Game in cooking, if you do it right.  The first time I cooked a full mean for Mrs. Ironwood, she dropped the fork, swallowed, and said "I want to have your babies."  I'm good.

So when we cohabitated, I cooked.  She didn't.  When we got married, I cooked, she didn't.  I do every meal, and I don't phone it in.  I have demanded that she learn how to respect the food even if she doesn't know how to prepare it, and I've introduced her to all sorts of cuisines she likely never would have tried.  My subtextual message was pretty loud: FOOD COMES THROUGH ME!  IF YOU WANT TO EAT WELL, KEEP ME HAPPY.

Even in my worst Beta years, I was always Alpha in the kitchen.  I could have a girlfriend in my kitchen and even assist, but if she started trying to take control, I'd throw a bitch out. MY DOMAIN.  And if she didn't like the food . . . well, sure sign of poor relationship material.

Mrs. Ironwood loves everything I put in front of her.  While her single girlfriends were eating Ramen noodles or "dating for dinner" or hitting McD's AGAIN, she was getting incredible meals every night.  Serious DHV.

So, now that I have kids, and I'm running a family in addition to a relationship, the kitchen and meal prep is an even more important extension of power and order in my household.  There's nothing beta in mandating when and what shall be consumed by the family, what is purchased at the grocery store and how much is spent.  In a post-industrial world where cleaning and supplying has been largely outsourced or simplified, cooking (and laundry) remain the key components of housework left.  Athol has spoken at length about the Game value of doing laundry, and I defer to his expertise on the matter.  But the Married Game value of cooking is at least as high, and can be much, much higher.

And now that I have kids, I use cooking to make sure they have the Ironwood gene for culinary arts intact, and teach them my rules and my perspective on food.  One child at a time is designated "kitchen elf" and acts as an apprentice and assistant.  Each meal they cook comes with a lecture on where the food came from, nutrient value, portions, preservation, native culture, method of cultivation, and important historical and cultural points related to the food.  All very nerdy, yes.

But my 7 year old can turn a pretty deft omelet.  My 10 year old makes her own pie crust.  My 12 year old can tell you far, far more than you wanted to know about all sorts of kitchen and food-related lore.  We have enshrined "rules of the kitchen", from Rule No. 1: Sharp things cut, hot things burn to The Ironwood Rule: In this house, we garnish!  My kids go to the grocery store and farmer's market with me, help with cleanup (with a little coercion) and are generally part of the cooking tradition.  Mrs. Ironwood has learned enough to be competent with very simple dishes, but I still like having one of the kids around to watch her, just in case.

Cooking is not exclusively a feminine province.  Consider the scene from <i>Goodfellas</i>, when the mobsters are conspiring to cook pasta in prison and pay loving attention  to each detail of the meal.  In the rugged Pyrenees the Euskandulak gentlemen's "supper clubs" are all-male social opportunities wherein the local leading men of the community take turns producing fabulous meals for each other (and then go on to discuss smuggling operations or furthering the goals of the Basque Separatist movement with guns and bombs).  In my own beloved South, there are teams of male barbecue enthusiasts who compete relentlessly for title and reputation.  Last weekend I had the fortune to be on a Scout backpacking trip during which I ate expertly prepared venison and squirrel by a man who knew how to use seasoning and preparation to bring out the full, rich flavor of the meat.

There is nothing at all unmanly about food prep.  Nor is it a demeaning or unhonorable task.  Indeed, the idea that "men don't cook" for years gave women power over the domestic homefront.  Now that division of labor is a lot less pronounced, there's no reason at all why a man can't be responsible for the food that goes in the mouths of his family.

It's a subtle Art, make no mistake.  The comfortable dependability of food provides plenty of positive Beta, and your craft -- and eventual mastery -- of turning ingredients into delicious food provides a powerful statement about your dedication and skill, knowledge and creativity, all of which are Alpha.

But then it comes to presentation, and that's where the real Alpha kicks in.  Anyone can cook, eventually.  But if you really want to get the most out of the experience then I suggest you cultivate a bit of showmanship and cunning about how you present your food to the people who eat it.  That doesn't necessarily mean that every meal has to be 5 star fare, but it does mean that you use attractive and appropriate settings to support your meals.

One advantage of living in a traditionally-oriented culture like the South is that there is a culture of appreciation around manners, etiquette, and the proper enjoyment of food.  My table is My Table, and I set the rules.  It's as much my arena as my bed or my desk, and I enforce those rules rigorously (though not always successfully) when we are eating.  The rules are not decided by mutual consensus, or a vote, or anything other than the fact that it is My Table, the Captain's Table, and I alone am the arbiter of the rules there.

If they don't like it, there's peanut butter and jelly in the pantry.

So don't dismiss this very valuable avenue of alpha/beta power as inherently feminine or demeaning.  That would be letting go of a potential masculine asset.

Besides, don't forget that far more women poison their husbands than vice versa.  No need to tempt her.  Just sayin'.
Posted by Ian Ironwood at 3:20 PM