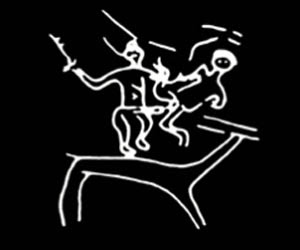 A lot of fellas around the Manosphere speak of Marriage 1.0 and 2.0 when referring to the tectonic shift in culture and lifestyle the Sexual Revolution caused. They're referring basically to the sex-for-security swap implicit to the old-style of marriage. And as a term-of-art it is sufficient.

But it's not entirely accurate. You see, marriage has gone through several phases and sub-phases, depending upon the economy of the culture and the class of the individuals. You can actually trace Marriage, as a cultural institution, to three distinct presentations:

Marriage 1.0 was the Tribal marriage.


Now for years anthropologists have delighted at the study of "primitive" (tribal) customs of birth, mating, warfare and death amongst the far-flung tribal peoples of the earth before they were all culturally assimilated and exposed to the modern world. From that wide pool of data we can draw a few conclusions: tribal peoples use a breathtaking array of clans, societies, family ties and ancestral divinities to regulate formal family ties. We can also distill the majority of these customs and fetishes down to a relatively straightforward model that in all likelihood was the "paleo" standard for 90,000 years or so.

Now to some, that makes it automatically The Way Things Should Work, like the Paleo Diet, the Paleo Lifestyle, and the Paleo Workout. Only, maybe not so much.

It turns out that most Paleomarriages were the result of 1) short life expectancy/high infant mortality 2) hunter/gatherer/fisher economy and 3) availability of protein in the diet. Since this was the Time Before Writing and the Time Before Muffins, how much protein you could get really did determine whether or not you lived or died. As a population stabilizes in a given eco-economy, then a fourth consideration, avoiding genetic mishaps through interbreeding, becomes important, too. That's the role that various animal-descended clans play in tribal cultures, ensuring that you don't accidentally marry your first cousin. Of course, when you're likely to meet only 300 people in your entire life, marrying your cousin might just be a viable option.

Where protein is plentiful, then competition between men for mates tends to be less aggressive and the sexual mores tend to be loosely controlled. Where protein is scarce, then mating patterns tend to be more aggressive and the sexual culture more conservative. There are plenty of exceptions to all of these throughout human history, since human culture wiggles around so darn much, but that's the way most tribal cultures work. It tends to be a soft monogamy/polygamy, with only high-status males having more than one wife. Since status is determined by the ability to secure protein, the more adept at hunting/fishing, the higher likelihood a given male will have more than one wife. Paternity is a dicey subject, even so, and in many tribal cultures descent is measured through the woman and her brothers, not the father. And that's the basic saber-toothed-tiger model, or Marriage 1.0.

In a Tribal Marriage (1.0) the partners are usually tightly controlled by the parents and the "tribal elders", and usually begins shortly after sexual maturity. Most marriages are arranged, sometimes by parents or grandparents years in advance to cement a tribal alliance, fulfill a sacred obligation, or simply because that's your best shot at getting a spouse. While children are a blessing, they also involve a substantial investment on behalf of the tribe to raise to maturity.

Most cultural elements concerning sex, therefore, actively limit reproduction with a wide-array of taboos to keep populations within a manageable size -- that is, small enough so that everyone can still make it through the winter on what they can hunt. For example some island-bound tribes restrict the wife's ability to have sex with her husband for SEVEN YEARS after the birth of her child, so as to space out the little tykes enough to ensure that there's enough protein for all of them. Because sometimes there isn't.

With life expectancy and infant mortality so horrific, you might work your way through a couple of mates along the way, plus whatever booty you could sneak on the side, and no one is going to ask too closely about the paternity of your kids because, let's face it, as long as the little bugger can hunt/gather/fish, he's an asset to the tribe. More wives equals more mouths to feed which at this point puts a big strain even on a good hunter. So low-protein cultures tend towards a kind of primitive monogamy, with rare occurrences of high-status polygamy, usually later in life.

Then we went and started domesticating things, and we got Marriage 1.1. Once we figured out that our protein supply would dramatically increase if we actually followed the herds instead of hunting them sporadically, or using nets instead of spears to catch fish, or settle in a lush region replete with protein sources, then things begin to get measured in terms of "wealth", not prowess. Or not entirely prowess. Once a man can lay claim to a domesticated herd of goats/cows/horses/water buffalo/camels/carribou/whatever, then his ability to provide protein goes far beyond his ability to hunt it the hard way. By carefully managing his herd or his nets he can start using the surplus to trade, to bank against hard times, or to improve his status within the tribe. "Wealth" as we know it is born. Marriage 1.1 is where you really start seeing the rise of polygamy as a social institution, because now one man can provide enough protein for several wives and their offspring, and can hire enough guards to keep his home and herds secure.

Conversely, he could raid a rival tribe and steal their cattle to both enrich himself and improve his status. That's the cultural imperative at the heart of the famous Cattle Raid of Cullee, an ancient Irish epic that relies heavily on cattle rustling to move the plot forward. In nomadic herding cultures "private property" was pretty much what you could carry and protect, so stealing your neighbor's cows becomes a test of your abilities, not an automatic felony. Of course, if you got caught you usually got killed or were fined heavily or were sold into slavery, so the risks were as great as the rewards.

You can think of the shift from hunter/gatherers to herders/ranchers/horticulturists as the shift from primitive monogamy to primitive polygamy. The economy starts to revolve around how many critters you can call your own, and starts to take on strong territorial overtones. This is roughly the culture of the Old Testament, the one Abraham found himself in. This is the first glimmer that the issue of paternity and inheritance becomes important. Instead of being worried about the spirits of animals and nature, which is the more pantheistic focus of Religion 1.0, you start to focus on the human ancestors: the more polytheistic and anthropomorphic Religion 1.1. Where horticulture is widely practiced, the number of fruit trees you have is factored into the cow/goat/horse balance sheet. Your status grows with every foaling and harvest season -- or dies with the cattle and trees. Life is still hard, children are still a blessing, but they are still a pretty big investment. Making sure that the ones you're feeding are the ones you sired becomes more and more important.

In Tribal Marriage 1.1, the same rules apply as to 1.0 arranged marriages, but now the issue of bride price and/or dowry start to rear their ugly head. A man who courts your daughter has to prove he is wealthy enough -- has enough cows -- to provide for his wife and your grandkids. Or you and your new in-laws contribute a few critters each to get the new couple started. But at this point, cows are changing hands in one direction or another, and a man stops being measured by his military/hunting prowess and starts being measured by his "wealth" . . . in cows. If a man is wealthy enough, then bringing on a second-tier wife for the first wife to boss around is usually encouraged. And when you die, your widow and kids get to divide up your herds with a minimum of blood feuds. Got one cow too many to divide? Then slaughter it, share it, and have a barbecue in your honor. From about 15,000 BCE to 10,000 BCE, this was pretty much how everyone did things

Then some idiot went and invented muffins and screwed everything up.
Posted by Ian Ironwood at 11:53 AM